Here is another (see previous post) sample of the ChessFlash PGN Viewer, this time showing the Saavedra Position. The point of this demo is to show the concept of the "tabbed variations" board on the right. As you scroll through the main line using the buttons on the green board, note the "tabs" on the red board and try clicking those to see what happens. Does it make sense to you? You can also click in the text area.

All feedback and bug reports are welcome.

This is a test to check embedding this viewer and using it in different browsers. The game is mine against Polly in the recent LEPer tournament.

The viewer is live. Click the buttons, click the moves in the text area. Experiment -- it should mostly make sense.

Adobe Flash 9 is required. If you can see the viewer, any feedback is appreciated. If you can't see it in your browser, please let me know.
Update: A bug has been found and fixed: at the end of the game or at the end of a variation the "Side to Move Indicator" (black or white box at bottom right of the board) was incorrect.

The Global eBook Middlegame Collaborative is looking for a few obsessive compulsive chessplayers interested in middlegames. I fit the bill and I'm interested in their project but have too many irons in the fire right now ("not working" seems to be consuming lots of time :) ).

I would like to let you know that we have just opened our Chess room, known as The Arena, at Coffee Oasis in Seabrook. It is getting rave reviews from our customers. Rather than describing it, I have attached some pictures which I think will give you the feel of the place. 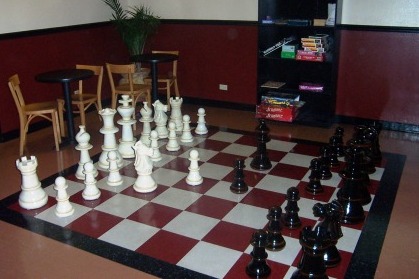 I do not believe you will find a more welcoming, comfortable, or encouraging environment for your games, lessons, tournaments, or gatherings. We invite you to come by and see for yourself. We are located at 4650 NASA Parkway in Seabrook, Texas. (The intersection of NASA Parkway and Kirby.) We would love to host your events and invite you and your friends to come and play. 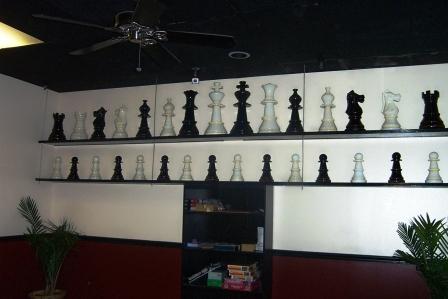 In addition to this chess friendly environment, we have all the beverages you would want to find at a first rate coffeehouse with locally roasted coffees, a full menu for snacks and meals, and free wireless internet.

We look forward to seeing you at Coffee Oasis.

What have the Knights been up to lately? Here are some brief excerpts from the posts of Knights Errant in the Heat of Battle that have posted since April 6. Visit their blogs for more details!

Someone compared the chess blogosphere to a cult. It's true we praise Caissa, the Goddess of Chess. And sometimes she demands expiation, the sacrifice of countless hours studying tactics and positions from master games.

A break-away from the DaBattPinOlC cult?

It was the first time I'd played him as white, he played the French. I'd just been reading about the best way to play Kings Indian Attack against different openings a couple of days ago,...

Vassily Ivanchuk is on fire at the MTel Masters in Bulgaria. He has won all five of his games, which is a pretty crazy feat at a category 20 tournament. With five out of five points, his performance rating is a whopping 3537.

I have just two days... What should i do to prepare the most as i can? Please comment if you have any idea.
My situation is i don't know anything about 1.d4 or anything varies from 1.e4 as black or white

I take a vacation from chess and i'm returning now. In this time I lost a couple of games at chess.com, this dropped my rating to 1580 +-.
It's very hard to conciliate chess with life.

I finished with an overall success rate of 64%, which according to the Petrosian school of chess, I should be playing at master level haha.

Ive started my cycles and right now Im halfway cycle1. Last Tuesday I played a game of rapid chess at the chess club in Leiden (the Netherlands). I played with black and it was a Benko gambit, nothing unusual. But I was seeing tactical opportunities very fast, and the guy was blown away.

This is a position from my last game in the Kansas City Quick Championship. At this point I was tied for first place and had the white pieces; however, in time pressure I lost the tread. What is the winning sequence of moves? White to move.

just hanging out workin on the old house. :-) been working on the dutch system a bit. having trouble with ... computer says go ahead and grab dem pawns. so i do. but then trouble is not far behind usually with a Q comming and rooks and all sortsa unleashed madness.

I've been thinking about getting a tactics training program, what would you guys recommend? CT Art probably is too hard for me atm, so the question is CTB, or the intermediate level Convekta program?

Tacticus Maximus That's me. I've been redoing the PCT Tactics module 1 exercises lately. I started module 4 but found the exercises harder than what I want from a circles-type approach. I'm sure I'll revisit the module 4 (and higher) exercises at some point when I want to spend more time on each problem.

I have also been developing for ChessFlash (flash based pgn viewer and chess authoring tool, etc) and teaching chess at an after-school program and working with my private students.

I picked up Michael de la Mazas rapid chess improvement at Barnes & Noble and was intrigued by the concept of tactical study. I read about the  Concentric Square  exercise and being a programmer I immediately thought; I could make this into a program. I have done just that. My first idea was that I could sell the program to Michael, hoping he might include it with his book. I later decided that I didnt need to make any money with this program and Im willing to give it away for free. My program sits unused but a few friends that Ive personally given it. I thought the Knights Errant group may like to check it out. Its currently only for Windows, but that may change.

Just go to my website to download a zip file that contains the application and a help file. There is no installation required.

I did download the file, unzip it and virus scanned it (no virus found) and ran the program a bit. It looks great.