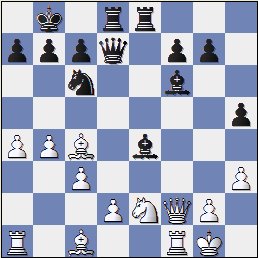 (Read More...) posted by Glenn Wilson @ 7:06 PM
Comments:
Looks like the Wilson Gambit won't be in the pages of New In Chess next issue.

@liquideggproduct:
The Pirc, the King's Indian, the Najdorf, the Svesnikov were all considered unsound at one time. Besides, I had a perfectly reasonable position at move 17.
"First they laugh at you, then they ignore you, then they fight with you, then you win." Mahatma Gandhi

Next step: choosing to ignore that you had a decent position at move 17. Nonetheless, I'm thinking of attempting a Wilson Gambit next opportunity in your honor (as long as the game doesn't involve too many rating points).

I should be back in Houston in a couple weeks, and look forward to some HCC action.

@liquideggproduct: Hmmm... Next opportunity? I think we're playing next week in your tournament. It would be ironic for you to play it against me.

Hmm, I didn't think this was the true Wilson Gambit, doesn't that go 2. b3? Anyway, a little background, I had visited Glenn's excellent openings archives awhile back, but didn't have a chance to bone up again before the game, I just remembered he had some special lines against the Centre Countre that involved Black getting waxed when he tried to hold the pawn--against a tactically-oriented Expert I just wanted to forget about winning a pawn, develop rapidly and be aggressive.

To be honest, during the game I thought 17. d4 still left me with some advantage but now that I've looked it over again I've gotta agree that White probably has an edge.

17. d4 would lead to a position I would like to play. I think the chances are probably about even. I can't believe I did not even consider it.

The time you proposed for the match should work fine. This will fulfill the third part of the Gandhi quote, where we fight.