Yes, BDK did dub me Tacticus Maximus for my opinion that chess is all tactics. The high-level strategies in chess are to checkmate the opponent and to avoid being checkmated. And those high-level strategies are inherently tactical. So why am I talking strategy? In chess the word strategy is often used to describe a move or series of moves that improves one's position without involving a combination. That usage, although common, is wrong and misleading, in my not so humble opinion.

Anyhoo, the PCT strategy modules mostly deals with the sort of moves that are not combinations but improve one's position. And, I have found it to be excellent training material. I have just completed the first module of 51 units: 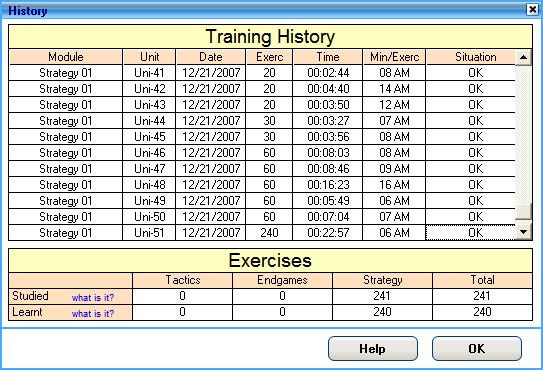 (If you are wondering why there are no learnt tactics in the above dialog it is because I have a separate user defined that I use for doing the strategy modules.)

This product is primarily targeted at players below my playing level and I have found many of these Module 1 Strategy exercises to be easy for me, as expected. But not all of them and I have definitely improved my chess knowledge by going through these. I think anyone with a rating below about USCF 2000 would benefit from these exercises. I look forward to going through the other two Strategy modules.

I have not abandoned the Tactics modules (which deal with combinations) and am currently working on PCT Tactics module 3. I'd like to finish that one before the end of the year but it might spill over into 2008.

(Read More...) posted by Glenn Wilson @ 6:43 AM
Comments:
A bit off topic but I'm a bit surprised that you play both the ambitious Smith Morra gambit an the not so ambitious Moron defense. The only thing those openings have in common I can think of is that both openings require not too much preparation.

Interesting point. Actually, to play the moron one should have a good background in the openings it may transpose into such as the Pirc, KID and possibly the Philidor so I can't use the excuse of low opening prep as the reason I play it. To some extent I started playing it because I already played the Pirc and KID. I also play it because at the club level it really is a dangerous weapon.

Why it is dangerous goes to your current studies on pawn play (but also minor piece tactics). Often white does not know what is going on and gives black a pawn hole at d4. OTOH, black keeps pawns at c6 and f6. Black's knights can be happier in the center than white's.

As white I play a wide variety -- the Smith Morra is my current weapon of choice against the sicilian but I may also play a KIA or Bb5 line or a closed Sicilian.

I tend to play gambits as white and counter-attacking openings as black.