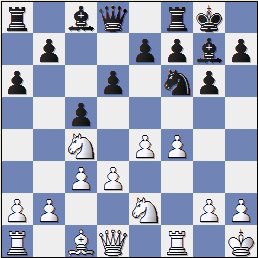 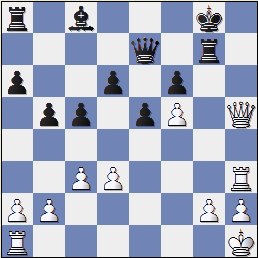 I thought 1...Rh7, forcing a major piece trade, which would strongly benefit Black. My lines:

1...Bb7, improving your position with a gain of tempo.

svensp: Yes, I think Bb7 does the job, nicely. If I had my head about me I would have played it instead of, you guessed it, Qf7?? What was I thinking!

Have you seen all the blitz videos? Can you say something about in what areas a grandmaster is better in blitz than you?

temposchlucker:
I have just watched a few, about ten. The one on the Pirc caught my eye.

GMs are better than me in blitz in the opening, the middlegame, the endgame, tactics, general chess knowledge and strategy. But, I think the biggest difference, or the one that makes the most difference, is ..... tactics. The tactics appear to be effortless and seamless to the GM because they see so much so fast compared to non-masters. Because the tactics are effortless and seamless to their game it is easy to miss.

I have played GMs (and IMs and Sr. Masters and Masters) at blitz and slower time controls and the difference is tactical vision and ability.

I really do not think one can underestimate the importance of tactics. But then, you knew I was going to say that. :)

Yeah, I just have to find out if you mean tactical tactics or positional tactics:)

Concrete tactical tactics. Other things make a difference but that is the biggest one.

That is very interesting. Although he is clearly better at tactical tactics, I hadn't the idea that the gap is unbridgeable. I see a huge difference in positional tactics though.

You may be right, but I think that some/most of what you see as "positional tactics" he sees as concrete "tactical tactics."

glenn, good regular blogging is nice to read, and, no matter how great a blog, folks who are eratic diminish my interest. i keep an active watch on links, and constantly move locations.

Thanks DK. I hope I can live up to the expectations. :)