My Knights Errant Quest is underway using Personal Chess Trainer 2007 (PCT). You can download a trial version at the link. The trial version I downloaded worked exactly once. The second time I tried to use it it had no exercises available. Fortunately I played around in it quite a bit that one time so I had already decided I wanted to buy it. After buying it I had to uninstall and reinstall to see any exercises. A minor quirk.

It has six tactics modules (there are other modules but tactics is the one I am interested in at the moment) each of which has 51 exercises. The exercises have varying numbers of problems in them -- 60 to 240 for those I have done so far. I poked around a bit in module 1 and decided to skip it as the problems seemed just too easy for me. I have been working in module 2 for 6 days now and have completed 20 units: 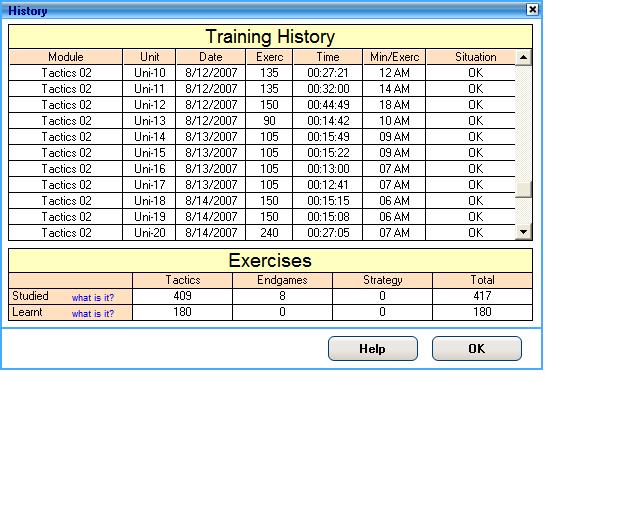 So far I like the selection of problems and while I know many of them on sight some of them are a little challenging and are adding to my store of known positions or position "chunks". I have only run across one totally bogus problem -- it would be nice if I could mark that somehow to skip it in the future but I don't see a way to do that. One bogus out of 409 so far seems pretty good though. There are a few problems that have multiple correct answers but PCT doesn't recognize them all so you have to learn which answer it wants. There are just a few of those and that has not hampered my use of the software.

To make the exercises more interesting I have started to try to do them as fast as I can, but correctly of course. I have lately been averaging around 6-7 seconds per problem which seems pretty good.

I am quite happy with the software -- it does what it is supposed to do and makes going through the circles on these problems easy and fun. Now, I guess we'll just have to see what if any affect this will have on my chess ability.

I am also going through Part II of the Encyclopedia of Chess Middlegames, about one problem per day. The print quality of this book is low, but the problems are great. If you are not familiar with it, these are difficult positions from GM games. The correct answers are typically "!" moves even for GMs. I set it up on a board and go through the analysis in my head as if in a game. I have the benefit of a) knowing there is an "!" move to be found and b) knowing the category of the problem (discovered check, etc). I write out the analysis and when done I check my written analysis against the answer. If I err it is typically in not considering the best defense. I need to work on that.

Update: Shortly after posting this I started PCT exercises 21 and then 22. The problems seem to have jumped up in difficulty. I am not able to solve them as well or as fast but I am learning more. Also, I think "problem fatigue" is setting in and I'll be dropping the pace to one or two exercises per day.

(Read More...) posted by Glenn Wilson @ 5:32 AM
Comments:
Sweet. I too wish there was a way to customize it. 1. Skip the positions I feel are wrong or teaching me incorrectly and 2. Set the maximum number of positions I'm willing to do in one day--I don't feel like solving 240 problems at once. All in all though, it's good software, and a worthy alternative to CT-ART.

Does the newest version let you fire up Crafty to check the solution?

Yes, you can use crafty to analyse a position and you can also play a game against crafty.